How to create-react-app with Docker

Why would you want to use Docker to do React app work? Isn't Docker for server-side stuff like Python and Golang etc? No, all the benefits of Docker apply to JavaScript client-side work too.

So there are three main things you want to do with create-react-app; dev server, running tests and creating build artifacts. Let's look at all three but using Docker.

And, once installed, create a new project:

We won't need the node_modules here in the project directory. Instead, when building the image we're going let node_modules stay inside the image. So you can go ahead and... rm -fr node_modules.

Let's just dive in. This Dockerfile is the minimum:

A couple of things to notice here.
First of all we're basing this on the official Node v8 repository on Docker Hub. That gives you a Node and Yarn by default.

Note how the NODE_PATH environment variable puts the node_modules in the root of the container. That's so that it doesn't get added in "here" (i.e. the current working directory). If you didn't do this, the node_modules directory would be part of the mounted volume which not only slows down Docker (since there are so many files) it also isn't necessary to see those files.

Note how the ENTRYPOINT points to run.sh. That's a file we need to create too, alongside the Dockerfile file.

Lastly, as a point of convenience, note that the default CMD is "start". That's so that when you simply run the container the default thing it does is to run yarn start.

The -t react:app is up to you. It doesn't matter so much what it is unless you're going to upload your container the a registry. Then you probably want the repository to be something unique.

Let's check that the build is there:

996MB! The base Node image is about ~700MB and the node_modules directory (for a clean new create-react-app) is ~160MB (at the time of writing). What the remaining difference is, I'm not sure. But it's empty calories and easy to lose. When you blow away the built image (docker image rmi react:app) your hard drive gets all that back and no actual code is lost.

Before we run it, lets go inside and see what was created:

The last command (sw-precache) was just to show that executables in /node_modules/.bin are indeed on the $PATH and can be run.

Now to run it: 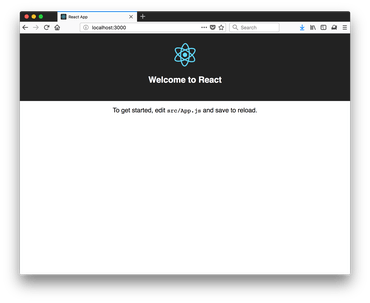 Pretty good. Open http://localhost:3000 in your browser and you should see the default create-react-app app.

create-react-app does not support hot reloading of components. But it does support web page reloading. As soon as a local file is changed, it sends a signal to the browser (using WebSockets) to tell it to... document.location.reload().

To make this work, we need to do two things:
1) Mount the current working directory into the Docker container
2) Expose the WebSocket port

Below is an example running this with a volume mount and both ports exposed.

In the about example output. First I make a harmless save in the src/App.js file just to see that the dev server notices and that my browser reloads when I did that. That's where it says

Secondly, I make an edit that triggers a warning. That's where it says:

This is great! Isn't create-react-app wonderful?

There are many things you can do with the code you're building. Let's pretend that the intention is to build a single-page-app and then take the static assets (including the index.html) and upload them to a public CDN or something. To do that we need to generate the build directory.

The trick here is to run this with a volume mount so that when it creates /app/build (from the perspective) of the container, that directory effectively becomes visible in the host.

Now, on the host:

The contents of that file you can now upload to a CDN some public Nginx server that points to this as the root directory.

This one is so easy and obvious now.

Note the that we're setting up a volume mount here again. Since the test runner is interactive it sits and waits for file changes and re-runs tests immediately, it's important to do the mount now.

All regular jest options work too. For example:

First of all, when I say "debugging the node_modules", in this context, I'm referring to messing with node_modules whilst running tests or running the dev server.

One way to debug the node_modules used is to enter a bash shell and literally mess with the files inside it. First, start the dev server (or start the test runner) and give the container a name:

Now, in a separate terminal start bash in the container:

Once you're in you can install an editor and start editing files:

As soon as you make changes to any of the files, the dev server should notice and reload.

When you stop the container all your changes will be reset. So if you had to sprinkle the node_modules with console.log('WHAT THE HECK!') all of those disappear when the container is stopped.

This'll come as no surprise by now. You basically run bash and you're there:

When I look back at all the commands above, I can definitely see how it's pretty intimidating and daunting. So many things to remember and it's got that nasty feeling where you feel like your controlling your development environment through unwieldy levers rather than your own hands.

But think of the fundamental advantages too! It's all encapsulated now. What you're working on will be based on the exact same version of everything as your teammate, your dev server and your production server are using.

In my (Mozilla Services) work, the projects I work on, I actually use docker-compose for all things. And I have a Makefile to help me remember all the various docker-compose commands (thanks Jannis & Will!). One definitely neat thing you can do with docker-compose is start multiple containers. Then you can, with one command, start a Django server and the create-react-app dev server with one command. Perhaps a blog post for another day.

Exactly what I was looking for. U rock, sir! \m/

Great article, thank you very much. Just one comment, if you add a .dockerignore with node_modules/ in it you will send only a few kb to the docker demon instead of hundreds of mb :)

Thanks! I didn't even know about .dockerignore.

Can you explain a bit more why you must start in the current machine environment?
I'd really like to just pull a container from hub.docker.org that has all this built in...that would allow me to move to other machines and have the same environment

What do you mean by "why you must start in the current machine environment"?

I have the exact same question. Creating the app in host machine prior to moving it to the container seems to defeat one of the purposes of using docker which is to avoid installing any softwares in the host machine. I am not sure what I am missing here.

Good question and I'd have to think about that. Once you've created the project once you won't need `create-react-app` installed. Right? So you don't need that bloat.

And when after you exit, only add the created project to the git repo.

how can I host this with nginx-alpine?

For windows, (or just if you're interested in platform agnostic-ness) make sure you're adding the environment variable CHOKIDAR_USEPOLLING=true

Otherwise, the filesystem watching fails. The fs wrapping in Chokidar by environment variable is another fun feature provided by create-react-app.

Great Article, and very updated, thanks a lot! I have two questions:
Do you already have the docker-compose article?
This whole thing is just for development or it can be used in production? I got confused in the last paragraph with the dev word: "Then you can, with one command, start a Django server and the create-react-app DEV server with one command"

Thanks for pinging. I really should write one about using docker-compose to run all the things.

Hi, thanks for the article what´s on it works perfectly until I want to implement it using docker-compose, hot-reloading stops working, maybe I am doing something wrong, I have this docker-compose file:

Hi Jesus have you found a solution to your problem ? I have the same and I'm stuck too ...

how to pass $(pwd) in command line docker -run

What do you mean? What did you try?

By executing create-react-app outside docker that's missing the point of running inside docker. I have no node/npm/yarn on my host, and I don't want them. Like this all 'instructions/steps' just need docker, and work on all platform.

Also I get refresh using CHOKIDAR_USEPOLLING=true and without websocket port 35729 open.

The most useful info on the blog is the handling of node_modules.

+1 for a docker-compose example. Having to pass in volumes to mount for each operation defeats the purpose of making this easy.

I have a question about installing additional modules.

1. If I use yarn to install additional modules outside the container, I have to have yarn installed and it starts installing all the node modules that we're tucking into that subdirectory.
2. If I use yarn within the bash shell, it creates the new modules which leak out into the volume and I'm constantly erasing the node modules file within my volume directory.

Is there a way to have yarn add to the package without actually installing or have yarn within the container install to the new directory instead?

If you use a volume for the project directory add the file .yarnrc in the project root with the single line:
--modules-folder /node_modules
Then you can add modules with yarn by running bash within the container and yarn will use the container's node_modules folder without passing the directory back through the volume.

Amazing work! You covered pretty much everything I intended to scrap together today in a single, easy to understand post with perfectly working, optimized instructions. I tip my fedora, sir :)

I'm encountering an issue with a .cache directory in node_modules. I've got a Dockerfile similar to yours:


And in my docker-compose i only have one volume for /app. It looks like when doing docker-compose up (yarn start) a compilation step is creating a local node_modules/.cache directory with subdirectories for babel-loader and eslint-loader. Any idea what is causing that? How can I just have it use the /node_modules location instead?

So, within the container you get `/app/node_modules` and you also get a `./node_modules` folder?
It could be that some bad package doesn't respect `$NODE_PATH` which is sad.

Related by category:
How to "onchange" in ReactJS 21 October 2015 JavaScript, React
To then() or to success() in AngularJS 27 November 2014 JavaScript
Fastest way to find out if a file exists in S3 (with boto3) 16 June 2017 Web development
Linux tip: du --max-depth=1 27 September 2007 Linux
How to throttle AND debounce an autocomplete input in React 1 March 2018 JavaScript, React, Web development

Related by keyword:
Docker gotcha with building a Dockerfile in sub directory 2 March 2018
"No space left on device" on OSX Docker 3 October 2017
A darn good search filter function in JavaScript 12 September 2018
How to deploy a create-react-app 4 November 2016
Inline scripts in create-react-app 2.0 and CSP hashes 5 October 2018