Now that Autocompeter.com is launched I can publish some preliminary benchmarks of "real" usage. It's all on my MacBook Pro on a local network with a local Redis but it's quite telling that it's pretty fast.

What I did was I started with a completely empty Redis database then I did the following things:

In each benchmark I use wrk with 10 connections, lasting 5 seconds, using 5 threads.

And for each round I try with 1 processor, 2 processors and 8 processors (my laptop's max according to runtime.NumCPU()).

I ran it a bunch of times and recorded the last results for each number of processors.
The results are as follows: 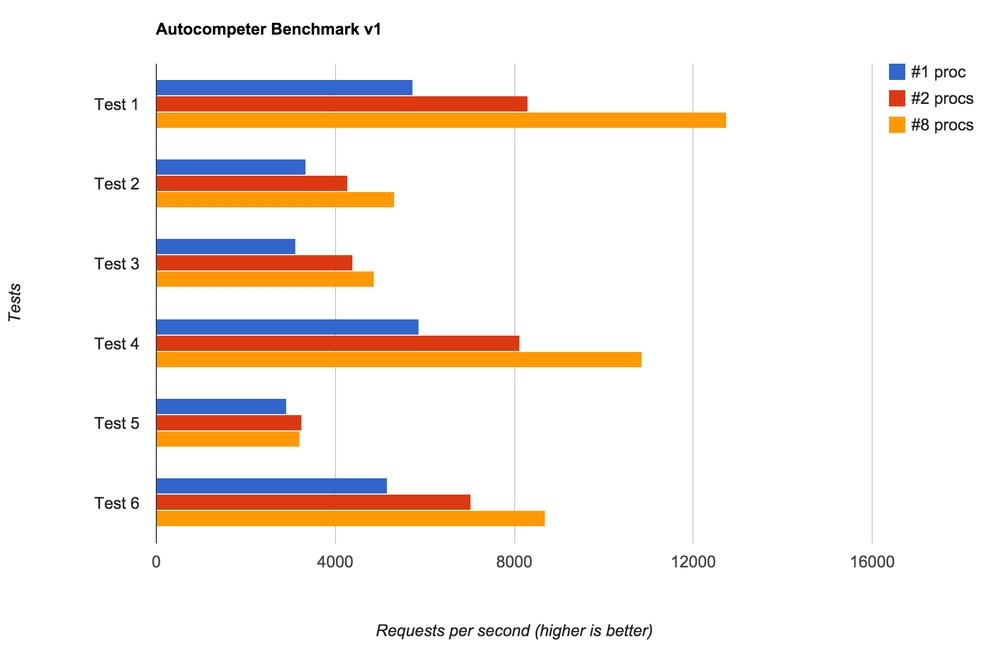 Basically, this is a benchmark of Redis more so than Go but it's quite telling that running it in multiple processors does help.

If you're curious, the benchmark code is here and I'm sure there's things one can do to speed it up even more. It's just interesting that it's so freakin' fast out of the box!

In particular I'm very pleased with the fact that it takes less than half a second to bulk load in over 1,000 documents.

Previous:
Match the whole word in auto complete maybe 10 April 2015
Next:
AngularJS $q notify and resolve as a local GET proxy 18 April 2015

Related by keyword:
Fastest way to uniqify a list in Python 14 August 2006
How to do performance micro benchmarks in Python 24 June 2017
Benchmark compare Highlight.js vs. Prism 19 May 2020
Django ORM optimization story on selecting the least possible 22 February 2019
The ideal number of workers in Jest 8 October 2018