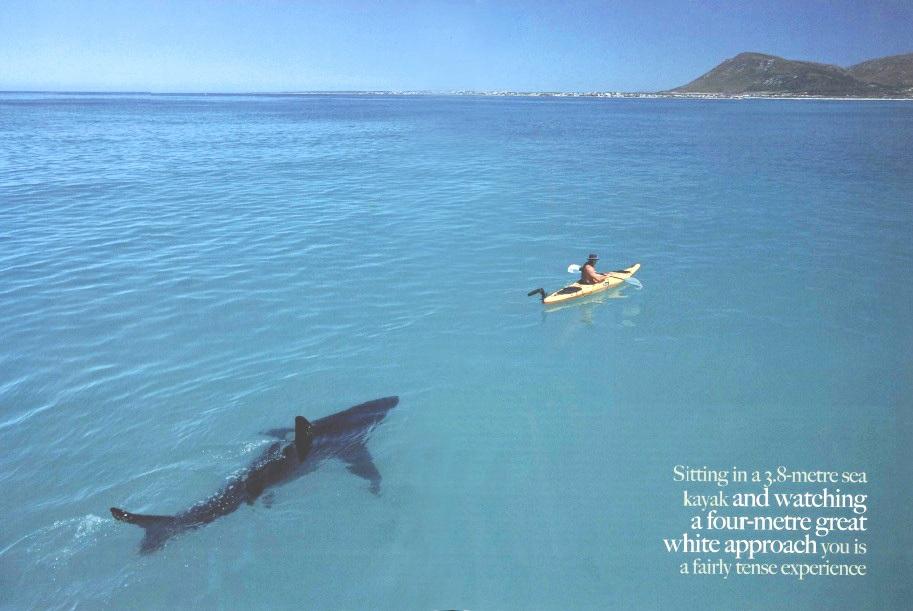 Did you see the spectacular photos from 2003 where a surfer is accompanied by a big dolphin looking like a shark? Well, it just looks like a shark but apparently is a dolphin (you can tell by the top fin). Well, here's a photo of a guy in a kayak being followed by a great white shark.

Accordning to Snopes.com the photo is real and fortunately it's a safe setting. The guy in the kayak is a great white shark researcher. Even if it is safe, they didn't know that until after the experiment :)

is it real or fake

Is it real mate

so is it a dolphin or a shark?

Its a Damn shark,look at the tail(up an down)dolphin(side to side)and that all there is to it.get a life you people.

I know the photographer, and it was a DOLPHIN. Real photo, and not that unusual in California to see them surfing.

100% shark... look at the tail, dolphins have horizontal tails, sharks have vertical. this aint no friendly flipper ;)

You don't KNOW the photographer, clearly. A DOLPHIN???? Dude. Remind me never to go fishing with you!

From snout to tail, there's NOTHING about this one that looks anything like a dolphin! LOL!

Yeah, you know the photographer. Riiiiight.

Remind me never to take your advise LOL !

How do you know the photographer was right though.

Remind me never to take your advice.

If you're going to make stuff up, at least try not to make up stupid things. Dork.

It's a shark you lot.does it look like a dolphin.NO.

The surfing shot shows a dolphin. The kayak shot is definitely a shark. It's pretty obvious if you know anything about sharks and dolphins.

Its a shark because its tail goes back and forth a dolphin's goes up and down so its a shark!

It's a shark because dolphins have a curved body shape and sharks have a straight body shape.