Real minimal example of going from setState to MobX

This is not meant as a tutorial on MobX but hopefully it can be inspirational for people who have grokked how React's setState works but now feel they need to move the state management in their React app out of the components. 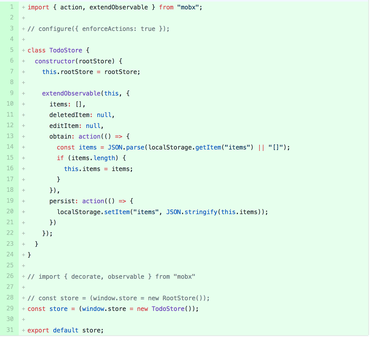 To jump right in, here is a changeset that demonstrates how to replace setState with a MobX store:
https://github.com/peterbe/workon/commit/c1846ce782ce7c9da16f44b10c48f0be1337ae41

It's a really simple Todo list application based on create-react-app. Not much to read into at this point.

Here are some caveats to be aware if you look at the diff and wonder...

Caveat last but not least... This diff does not much other than adding more library dependencies and fancy "observable arrays" that are hard to introspect with console.log debugging.
However, the intention is to...