What a book!
I defend that it took months to finish it with; it's not easy reading, I only read on the short train commute 3 days a week and I'm a really really slow reader. 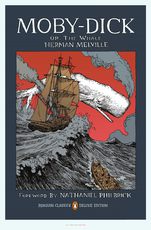 Even though it was hard going at times I generally enjoyed every page. Some passages were like reading Latin but with English words. Some pages where thrilling and some pages where beautiful as poetry. Some short passages were so amazing that you have to stop and just take a quick smile-break.

Unlike many people I actually didn't know how the book plays out or how it ends and I'm NOT going to spoil that here, in case you too want to read it too, not knowing how it ends. The only thing I regret is reading the editors introduction which revealed something crucial to the plot line without any warning.

It was not until afterwards when I read about the book on Wikipedia (link contains spoilers) that I appreciated the many sub-plots and sub-contexts. For example, the many metaphysical and theological undertones. For one thing (this is NOT a spoiler), if you're going to read it pay extra attention to peoples' names.

One thing I can reveal is that the book is basically three books but you don't really notice that when it goes from one to the other. I can not imagine a modern day publisher allowing that to happen to a contemporary book with contemporary readers who have less attention span than a gold fish. However, I am glad I've read it because not only is it an entertaining book it's also a good exercise in modern life that not everything has to be so perfect and lean.

And a final tip to you who now feel inspired to read the book for the first time; it's an old-English book with lots of words you won't know and that's fine, but do take the time to look up some of the nautical words related to the ship because they re-appear again and again when you're reading action filled passages. Like bulwark, masthead and starboard.