iWipe - toilet paper and a Mac 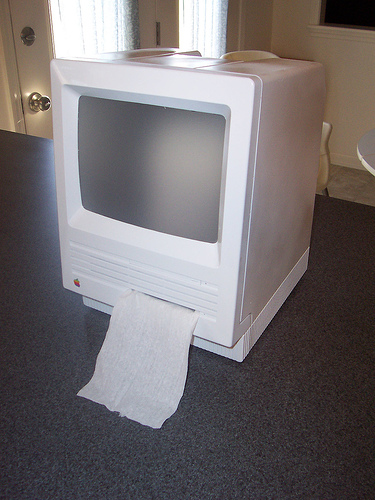 Is this geeky, trendy or just practical?

"Well, as soon as I saw the Mac SE case, I realized that this one had the most potential. So this weekend, I bought a few things at Home Depot and got started making my Apple-powered, wireless, portable toilet paper dispenser
the iWipe."

I don't really need a toilet paper holder but we do need a spice rack/shelve in the kitchen and I have an old medium towered PC box that one might turn into something. Perhaps a rectangular flower pot?

Old Macs doing their ordinary, everyday mundane things things...day after day...and now we have the iWipe...Think of the Possibilities

What an appropriate use for a Mac.