Find out all localStorage keys and their value sizes

Peterbe.com Find out all localStorage keys and their value sizes
Home Archive About Contact
Menu ▼

I use localhost:3000 for a lot of different projects. It's the default port on create-react-app's dev server. The browser profile remains but projects come and go. There's a lot of old stuff in there that I have no longer any memory of adding. 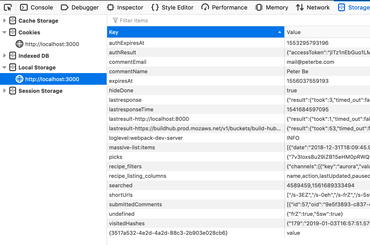 Working in a recent single page app, I tried to use localStorage as a cache for some XHR requests and got: DOMException: "The quota has been exceeded.".
Wat?! I'm only trying to store a ~250KB JSON string. Surely that's far away from the mythical 5MB limit. Do I really have to lzw compress the string in and out to save room and pay for it in CPU cycles?

Better yet, find out what junk I still have in there.

Paste this into your Web Console (it's safe as milk): 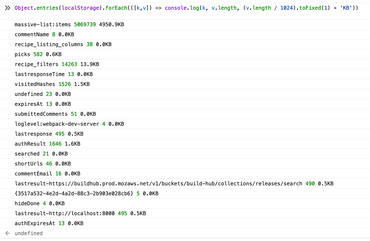 Or, sorted and filtered a bit:

And for the record, summed total in kilobytes:

I guess this means I can still use localStorage in my app. It seems I just need to localStorage.removeItem('massive-list:items') which sounds like an experiment, from eons ago, for seeing how much I can stuff in there.

Related by keyword:
Update to speed comparison for Redis vs PostgreSQL storing blobs of JSON 30 September 2019
localStorage is not async, but it's FAST! 06 October 2015
How post JSON with curl to an Express app 15 April 2020
Are WebSockets faster than AJAX? ...with latency in mind? 22 April 2012
Always return namespaces in Django REST Framework 11 May 2018