At work, we use Brotli (using the Node builtin zlib) to compress these large .json files to .json.br files. When using zlib.brotliCompress you can set options to override the quality number. Here's an example of it at quality 6:

But what if you mess with that number. Surely, the files will become smaller, but at what cost? Well, I wrote a Node script that measured how long it would take to compress 6 large (~25MB each) .json file synchronously. Then, I put them into a Google spreadsheet and voila: 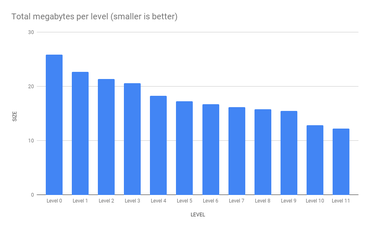 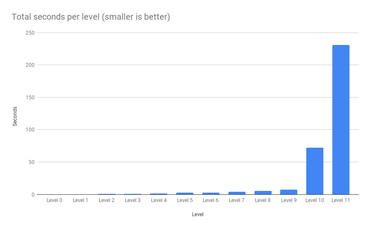 Miles away from rocket science but I thought it was cute to visualize as a way of understanding the quality option.

That's super interesting! So if time and compute is not a limiting issue one can get quite some smaler files!
I wonder if this this impacts decompression in any way? 🤔

Previous:
How to string pad a string in Python with a variable 19 October 2021
Next:
Sort a JavaScript array by some boolean operation 2 December 2021

Related by keyword:
Fastest Redis configuration for Django 11 May 2017
csso and django-pipeline 28 February 2018
Find out all localStorage keys and their value sizes 13 July 2019
Experimenting with Guetzli 24 May 2017
Crash-stats just became a whole lot faster 25 August 2015