tl;dr; Use React.PureComponent (or React.Component) if your component contains, or might contain, non-trivial logic that might affect it rendering or not. For all other cases, use a function, especially if it's not React specific.

When you have state, especially good old this.state and this.setState you have to use React.PureComponent (or React.Component if you must).

For stateless functions, where you're just getting some props in, perhaps massaging them and rendering some JSX, you have choices.
You can write a React component in these three different ways:

The last one can be called directly:

To be exact, you can actually call the second, component function, like this too:

Each one has its strength and weaknesses.

I don't know with confidence if this is the right way to test this but I really wanted to avoid process.env.NODE_ENV==='development' and I wanted to run each variant a bunch of times, because it feels more realistic, so as to avoid the slowness of the initial mounting.

So I made an app that looks like this:

This long chain of components calling "sub-components" starts right after the prop at the top changes. In the App that parents all of the variants, when the state changes the props change and it trickles down to that final last component. By taking a timestamp right before changing the state and during that last render you get a rough timeline for how long the whole chain took to render.

Perhaps it's best to skim the code of the App.js too. It's a bit messy and there's a bunch of whacky code that uses global window to log all the timestamps but the gist is that it measures the few milliseconds it takes before a re-render is triggered until the final components render function gets called.

The app has a little hacky interval function that randomly switches between the different variants every 2 seconds and every 300 milliseconds it clicks a button, which changes the state which triggers a re-render. 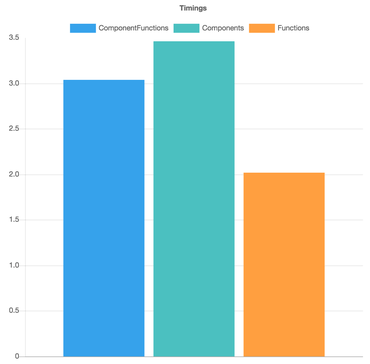 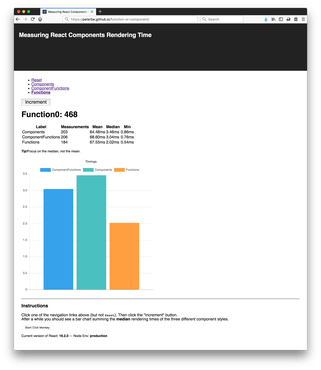 You can try for yourself here: https://peterbe.github.io/function-or-component/

Here's my rule of thumb, the life-cycle hooks are awesome. I often write a component, using ...extends React.PureComponent even though it could be a plain function. But over time, eventually you expand it and realize you need some life cycle hook. Or you might find that writing inline functions is getting messy. Or, you realize that this component is sometimes unnecessarily called by a more complicated parent, with the same props as last time!

The performance penalty, for using full React components, is small. It exists, but it's probably dwarfed by other costs such as mounting not to mention actual DOM updating. It's also very likely that your components could benefit more from avoiding render (which only shouldComponentUpdate really can do) than the cost of calling it. Meaning, if the slower component only has to render 500 times, marginally slower, than the function component rendering 1,000 times, then the slower sometimes-not-needing-to-render will eventually win the performance battle.

There is still value in the functional stateless component. See the pros & cons above. But one rule of thumb I have is that if the component is really simple and contains no fancy logic that might affect its rendering or not rendering, then use components as functions. They're "sending a message" (to the code reader) by being brief and simple. For example, I have this little snippet in my Common.js module:

It's got nothing to do with React and that becomes extra obvious simply my looking at it. It's cleary got just one job. It's used a lot and often by more complicated components.

Last but not least; I'm very aware that the much more experienced React gurus of the world have already said something similar but with more accuracy. But I didn't want to just blurt out my opinion without adding some meat and some numbers to it. And I've always disliked the confusion that there's a choice at all so hopefully this blog post will help someone else who still suffers from having to wonder when to use which. 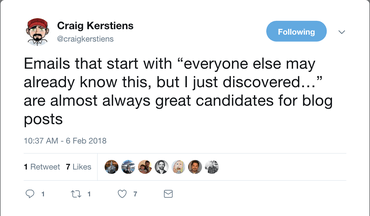 This post saved my life after 4 hours of errors and bugs. Thank you very much.

Previous:
Convert web page to PDF, nicely 04 February 2018
Next:
Show size of every PostgreSQL database you have 07 February 2018

Related by category:
How to "onchange" in ReactJS 21 October 2015 ReactJS
How to create-react-app with Docker 17 November 2017 ReactJS
How to throttle AND debounce an autocomplete input in React 01 March 2018 ReactJS
Display current React version 07 January 2018 ReactJS
Displaying fetch() errors and unwanted responses in React 06 February 2019 ReactJS