tl;dr; Preemptive suggestions are grocery shopping list item suggestions that appear before you have typed anything. It's like it can read your mind (based on AI).

In the next version of That's Groce! it will include a powerful feature I've long wanted to add but a lot of work and testing had to go into it: Preemptive suggestions.

Basically, That's Groce! knows which shopping list items you add often. It also knows when you last added it. It knows that you haven't added it to the list right now. And it knows which are more common than others. That's called the "Popularity contest".

The suggestions now appear underneath the add-new-item form. They appear where search suggestions usually appear. Before it used to be blank there until you typed something. For example, typing "b" would, in my household's case, show: "Blueberries", "Bananas", "Spreadable butter", etc.

The way preemptive suggestion work is ultimately quite simple, but a mouthful:

As an example; we often buy "Bananas". Let's assume its history of adding it to the list is:

The difference between those days, on average is about 6 days (for the sake of example). Now, if today's date is Monday, Feb 28, that means it was 8 days since it was last added (Sunday, Feb 20). Therefore, you add to the list this more frequently than it was last added! Therefore, include it as a preemptive suggestion.

The idea, and hope, of this, is to remove the labor of having to type "co" to make the "Coffee ☕️" suggestion appear. How about just making it appear simply by thinking about coffee? Or better, even before you think of coffee, so you don't forget to buy some more!

The new feature has already been released but it might take a while to appear on your account. And if you're a new user don't expect this to show up at all until you've used the app for a while. It needs to learn from your shopping habits. But have patience! You'll love it! 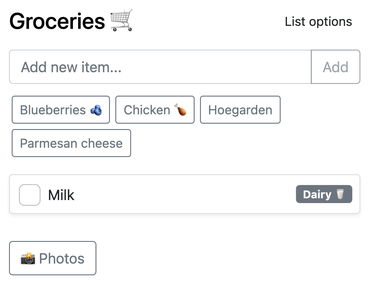 Note that "Milk" was appearing because it's a frequent item in our household, but it's no longer one of the suggestions because it's already been added to the list. And "Eggs" is also a very common item, but it's not appearing either because it was added (and checked off) in the last shopping trip.

Previous:
Tips and tricks to make you a GitHub Actions power-user 23 February 2022
Next:
Introducing docsQL 28 March 2022