This is how MDN Web Docs uses Elasticsearch. Daily, we build all the content and then upload it all using elasticsearch-dsl using aliases. Because there are no good complete guides to do this, I thought I'd write it down for the next person who needs to do something similar. Let's jump straight into the code. The reader will need a healthy dose of imagination to fill in their details.

What's important to note here is that the MyDocument.Index.name is dynamically allocated every single time the module is imported. It's not very important exactly what it is called but it's important that it becomes unique each time.
This means that when you start using MyDocument it will automatically figure out which index to use. Now, it's time to create the index and bulk publish it.

A lot is left to the reader as an exercise to fill in but these are the most important operations. It demonstrates how you can

After you've run this you'll see something like this:

When it comes to using the index, well, it depends on where your code for that is. For example, on MDN Web Docs, the code that searches the index is in an entirely different code-base. It's incidentally Python (and elasticsearch-dsl) in both places but other than that they have nothing in common. So for the searching, you need to manually make sure you write down the name of the index (or name of the alias if you prefer) into the code that searches. For example:

If you're within the same code that has that models.MyDocument in the first example code above, you can simply do things like this:

tl;dr; Periodically, the whole of MDN is built, by our Node code, in a GitHub Action. A Python script bulk-publishes this to Elasticsearch. Our Django server queries the same Elasticsearch via /api/v1/search. The site-search page is a static single-page app that sends XHR requests to the /api/v1/search endpoint. Search results' sort-order is determined by match and "popularity". 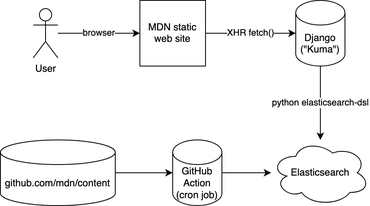