tl;dr; Up until recently, when you started to type a new entry in your That's Groce shopping list, the suggestions that would appear weren't sorted intelligently. Now they are. They're sorted by popularity.

The whole point with the suggestions that appear is to make it easier for you to not have to type the rest. The first factor that decides which should appear is simply based on what you've typed so far. If you started typing ch we can suggest:

They all contain ch in some form (starting of words only). But space is limited and you can't show every suggestion. So, if you're going to cap it to only show, say, 4 suggestions; which ones should you show first?
I think the solution is to do it by frequency. I.e. items you often put onto the list.

How to calculate the frequency

The way That's Groce now does it is that it knows the exact times a certain item was added to the list. It then takes that list and applies the following algorithm:

So the frequency becomes a number of seconds. It should feel somewhat realistic. In my family, it actually checks out. We buy bananas every week but sometimes slightly more often than that and in our case, the number comes to ~6 days. 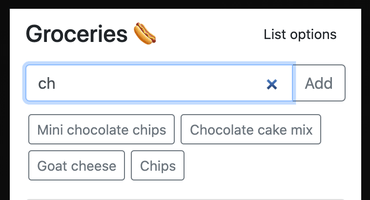 Before sorting by popularity 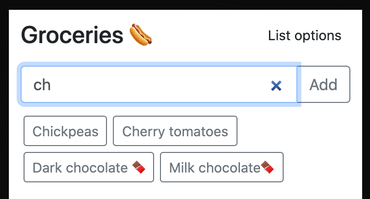 After sorting by popularity

Great! The chances of appreciating and picking one of the suggestions is greater if it's more likely to be what you were looking for. And things that have been added frequently in the past are more likely to be added again.

How to debug this

There's now a new page called the "Popularity contest". You get to it from the "List options" button in the upper right-hand corner. On its own, it's fairly "useless" because it just lists them. But it's nice to get a feeling for what your family most frequently add to the list. A lot more can probably be done to this page but for now, it really helps to back up the understanding of how the suggestions are sorted when you're adding new entries. 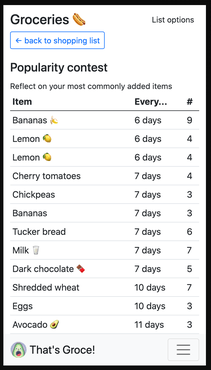 If you look carefully at my screenshot here you'll notice two little bugs. There are actually two different entries for "Lemon 🍋" and that was from the early days when that could happen.
Also, another bug is that there's one entry called "Bananas" and one called "Bananas 🍌" which is also something that's being fixed in the latest release. My own family's list predates those fixes.