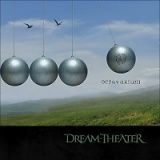 My latest CD I bought in a real shop was Ocatavarium by Dream Theater. It's fantastic! If you like crystal clear heavy metal with an impeccable musical production, then this is for you. Unlike the previous album, Train of Thought, this one is much lighter and even more accessible for non-death metal lovers. Some of the tunes remind me a bit about Muse's latest album Absolution but that's ok.

My favorite song is still Panic Attack but the second half of the song Octavarium is just absolutely marvelous! If you appreciate genuinely good music that will last for years to come, get this album too.

One of the many things I love about Dream Theater is that the alway manage to top their last album, and this happend again with 8V, Octavarium. It's a briliant new piece of Dream Theater with a variation of hard music and orchestra like stuff. My faforite song on Octavarium is the album song itself: Octavarium. It's harmonic and has even some orchestra parts in it. The song i least appreciate is I walk beside you, I think this song is to much U2 like.