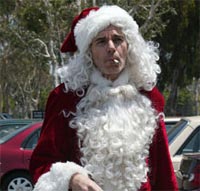 I knew nothing about this film went I went to see it at the cinema yesterday. No one had told me that it was a comedy and the opening scenes gives the impression of a black depressing film about a alcoholic loser who hates his life and contemplates committing suicide. Well, this is what the film is about. Him and his partner, a shopping mall and a fat bullied kid.

What makes the film to funny is the language Santa (played by Bill Bob Thornton) uses. The swearing and the sarcasm. Comedy is always funny if it's unexpected. The story is really quite sad and destructive much like Leaving Las Vegas and in such a morose environment every little joke is much appreciated.

Go and see this film. Don't expect a joyride but do muse over some of the little things in it.

UPDATE: Check out these photos of kids being afraid of santa