It seems that this article by Salvatore Sanfilippo (creator of Redis) himself seems to be a much cited article for this topic. If you haven't read it, the gist is that Redis can employ some clever optimizations for storing hash maps in a very memory efficient way instead of storing each key-value separately.

"Hashes, Lists, Sets composed of just integers, and Sorted Sets, when smaller than a given number of elements, and up to a maximum element size, are encoded in a very memory efficient way that uses up to 10 times less memory (with 5 time less memory used being the average saving)"

This efficient storage optimization is called a ziplist.

How does that work?

Suppose you have 1,000 keys (with their values) if you store them like this:

then, the total memory footprint of the Redis DB is linear. The total memory footprint is roughly that of the length of the keys and values.
Alternatively, if you use hash maps (essentially storing dictionaries instead of individual values) you can benefit from some of those "tricks". To do that, you need to "bucketize" or "shard" the keys. Basically, some way to lump together many keys under one "parent key". (Note this is only applicable if you have huge number of keys)

Since the numbers are all integers the first 4 characters means there are 10,000 different combinations. I.e. a total 10,000 hash maps.

So when you need to look up the value of key "1155315" you apply the same logic you did when you inserted it.

So this is where hash-max-ziplist-entries comes in. It's a configuration setting. In my Redis 3.2 install (both in an official Redis Docker image and on my Homebrew install) this number is 512. So what does that mean?

I believe, it means the maximum number of keys per hash map to benefit from the internal space optimization storage.

To demonstrate my understanding to myself, I wrote a hacky script that stores 1,000,000 keys with different "bucketization algorithms" (yeah, I made that term up). Depending how you run the script, it splits the keys (which are all integers) into different number of buckets. For example, if you integer divide each key by 500 you get 2,000 different hash map buckets, aka. total number of keys in the database.

So I run that script with a bunch of different sizes, flush the database between each run and at the end of every run I log how big the whole database is in number of megabytes. Draw a graph of this and this is what you get: 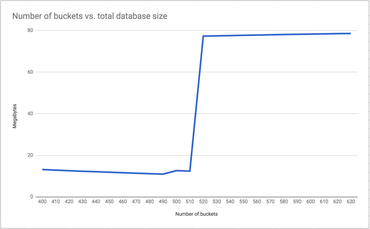 What's happening here is that since my hash-max-ziplist-entries is 512, around there, Redis does not want to store each hash map in space efficient way and stores it has plain key values.

In other words, when each hash map has more than 502 keys, memory usage shoots up.

The three lines represent 3 different batches of experiments. SET means it inserts N keys with the simple SET operator. HSET (1,000) inserts N keys with each key bucket is 1,000 keys. And lastly, HSET (500) means each hash map bucket has at most 500 keys. 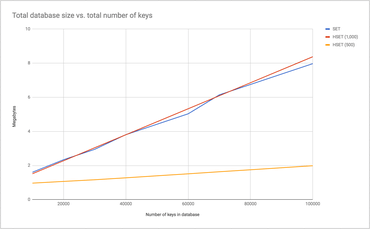 I guess you could say they're all linear but note that they all store the exact same total amount of information.

I honestly don't know but one thing is clear; there's no such thing as a free lunch.

In the memory-optimization article by Salvatore he alludes that "... a clear tradeoff between many things: CPU, memory, max element size.". So perhaps this neat trick that saves so much memory can comes at a cost of more CPU resource work. At the moment I don't know of a good way to measure this. So far my focus has been on the optimal way of storing things.

Also, I can only speculate but common sense smells like if that number (hash-max-ziplist-entries) is very large, Redis might allocate more memory for the tree it might store than it actually stores. Meaning if I set it to, say, 10,000 but most of my hash maps only have around 1,000 keys. Does that mean that the total memory usage goes up with empty memory allocations? 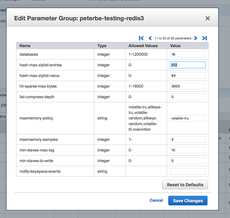 When I make that change and run the original script again but using 1,000 keys per bucket, the whole thing only uses 12MB. So it works.

I haven't actually tested this in AWS ElastiCache but I did try creating a new ElastiCache Parameter Group and there's an input for it.

According to this page it seems it's possible to change it with "Azure Redis Cache" too.

Lastly, I wish there was a way to run Redis where it spits out in a log file somewhere whenever your trip certain thresholds.

Previous:
Display current React version 07 January 2018
Next:
When Docker is too slow, use your host 11 January 2018

Related by category:
How much faster is Redis at storing a blob of JSON compared to PostgreSQL? 28 September 2019 Python, Redis
Best practice with retries with requests 19 April 2017 Python
Fastest way to find out if a file exists in S3 (with boto3) 16 June 2017 Python
Interesting float/int casting in Python 25 April 2006 Python
Fastest way to unzip a zip file in Python 31 January 2018 Python