tl;dr; More experiments with different ways to lazy load CSS with and without web fonts. Keeping it simple is almost best but not good enough.

Last week I blogged about Web Performance Optimization of a Single-Page-App and web fonts in which I experimented with tricks to delay the loading of some massive CSS file. The app is one of those newfangled single-page-app where JavaScript (React in this case) does ALL the DOM rendering, which is practical but suffers the first-load experience.

Again, let's iterate that single-page-apps built with fully fledged JavaScript frameworks isn't the enemy. The hope is that your visitors will load more than just one page. If users load it once, any further click within the app might involve some "blocking" AJAX but generally the app feels great since a click doesn't require a new page load.

Again, let's iterate what the ideal is. Ideally the page should load and be visually useful by the server sending all the DOM you almost need and once loaded, some JavaScript can turn the app "alive" so that further clicks just update the DOM instead of reloading. But that's not trivial. Things like react-router (especially version 4) makes it a lot easier but you now need a NodeJS server to render the pages server-side and you can't just easily take your "build" directory and put into a CDN like Firebase or CloudFront.

When I first started these experiements I was actually looking at what I can do with the JavaScript side to make first loads faster. Turns out fixing your CSS render blocking load and assessing use of web fonts has a bigger "bang for the buck".

Go Straight to the Results 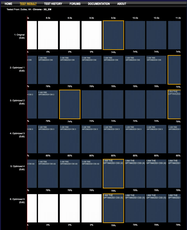 Same visual but as a comparative video

Stare at that for a second or two. Note that some versions start rendering something earlier than others. Some lose some of their rendered content and goes blank. Some change look significantly more than once before the final rendered result. As expected they almost all take the same total time till the final thing is fully rendered with DOM and all CSS loaded.

What Each Experimental Version Does

A regular webapp straight out of the ./build directory built with Create React App. Blocking CSS, blocking JS and no attempts to show any minimal DOM stuff first.

Same as Optimized version 1 but both the JavaScript that lazy loads the CSS and the React JavaScript has a defer on it to prevent render blockage.

Not much of an optimization. More of a test. Takes the original version but moves the <link rel="stylesheet" ... tags to just above the </body> tag. So below the <script src="..."> tags. Note how, around the 15 second mark, this renders the DOM (by the JavaScript code) before the CSS has loaded and it gets ugly. Note also how much longer this one takes because it has to context switch and go back to CSS loading and re-rendering after the DOM is built by the JavaScript.

All custom web font loading removed. Bye bye "Lato" font-family. Yes you could argue that it looks worse but I still believe performance makes users more happy ultimately than prettiness (not true for all sites, e.g. a fashion web app).
Actually this version is copied from the Optimized version 1 but with the web fonts removed. The final winner in my opinion.

Out of curiousity, let's remove the web fonts one more time but do it based on the Original. So no web fonts but CSS still render blocking.

So, Which Is Best?

I would say Optimized version 4. Remove the web font and do the loadCSS trick of loading the CSS after some really basic rendering but do that before loading the JavaScript. This is what I did to Podcast Time except slightly improved the initial server HTML so that it says "Loading..." immediately and I made the header nav look exactly like the one you get when everything is fully loaded.

Also, Chrome is quite a popular browser after all and the first browser that supports <link rel="preload" ...>. That means that when Chrome (and Opera 43 and Android Browser) parses the initial HTML and sees <link rel="preload" href="foo.css"> it can immediately start downloading that file and probably start parsing it too (in parallel). The visual comparison I did here on WebPagetest used Chrome (on 3G Emerging Markets) so that gives the optimized versions above a slight advantage only for Chrome.

To really make your fancy single-page-app fly like greased lightning you should probably do two things:

Most important is the sites' functionality and value but hopefully these experiments have shown that you can get pretty good mileage from your standard build of a single-page-app without having to do too much tooling.

Previous:
Web Performance Optimization of a Single-Page-App and web fonts 16 March 2017
Next:
Fastest way to download a file from S3 29 March 2017