How to encrypt a file with Emacs on macOS (ccrypt)

Peterbe.com How to encrypt a file with Emacs on macOS (ccrypt)
Home Archive About Contact
Menu ▼

Suppose you have a cleartext file that you want to encrypt with a password, here's how you do that with ccrypt on macOS. First:

Now, you have the ccrypt program. Let's test it:

There. Now you can back up that file on Dropbox or whatever and not have to worry about anybody being able to open it without your password. To read it again:

Or, to edit it you can do these steps:

Clunky that you have you extract the file and remember to encrypt it back again. That's where you can use emacs. Assuming you have emacs already installed and you have a ~/.emacs file. Add these lines to your ~/.emacs:

By the way, how did I know that the load path should be /usr/local/share/emacs/site-lisp/ccrypt? I looked at the output from brew:

Anyway, now I can use emacs to open the secrets.txt.cpt file and it will automatically handle the password stuff: 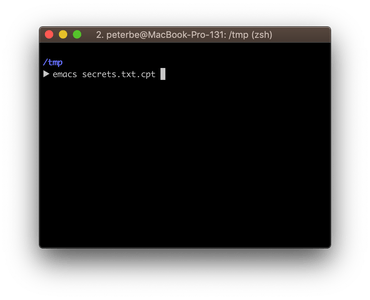 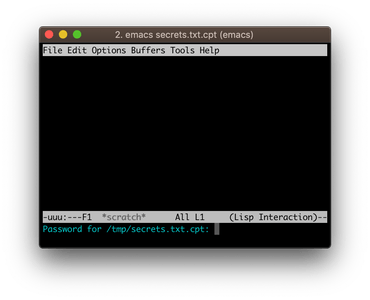 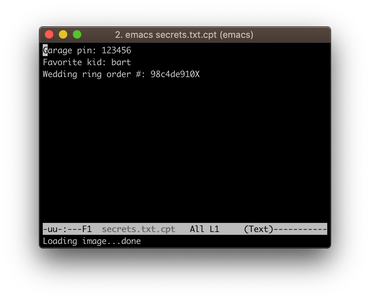 This is really convenient. Now you can open an encrypted file, type in your password, and it will take care of encrypting it for you when you're done (saving the file).

Be warned! I'm not an expert at either emacs or encryption so just be careful and if you get nervous take precaution and set aside more time to study this deeper.

Related by category:
How to create-react-app with Docker 17 November 2017 Linux
Be very careful with your add_header in Nginx! You might make your site insecure 11 February 2018 Linux
Linux tip: du --max-depth=1 27 September 2007 Linux
set -ex - The most useful bash trick of the year 31 August 2014 Linux
"No space left on device" on OSX Docker 03 October 2017 MacOSX