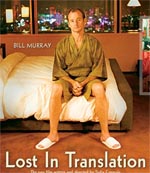 Lost In Translation is a beautiful little film about an American man and a woman, alone and misery in Tokoyo. He's an old movie celebrity. She is the wife of a fashionable photographer. They are both very lonely and are desperate to go back to America again. They don't know a word of Japanese and the Japanese don't know a word of English. Well, they know some but when they speak they mix up the r's and the l's. "Have a nice fright", "lip the stockings" they say.

There they are. Lonely at the hotel they're staying in and after some time they become friends and start to enjoy themselves. Their happiness isn't show by their words or actions. It's instead shown by how they enjoy Tokoyo.

With time they become better and better friends. Just on the verge of being romantic. He's much older than her and they're both married but somewhat uncertain of their marriages. It's kind of like forbidden love, still not like some many other cheesie movies. They kind of love that was acted out in this film is very rare in movies.

I really like Bill Murray who plays the leading role with Scarlett Johansson. There's lots of good humour throughout the film.

A returning joke is the language barrier. Something that I personally feel resemblance with from when I moved to France.

You should definitely try to go and see this film. I recommend it. Here's the page IMDB.com