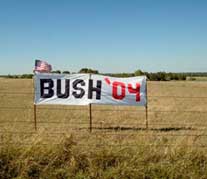 BBC have a great little website called BBS NEWS | In Pictures. Sometimes they have a theme on something, like today the Bush country theme.

I love these kind of photographic slideshows. No long texts to read and you get to watch the photos one by one. Then I also love this kind of journalism from within the USA. The kind of stuff I see, as a european, is often stuff from the front, i.e. new york, hollywood, washington, so this is greatly appreciated. Here's a nice little quote: