I'm working on a Firebase app called That's Groce! based on preact-cli , with TypeScript, and I wanted to see how it appears with or without Firestore and Authenticated lazy-loaded.

In the root, there's an app.tsx that used look like this:

While this works, it does make a really large bundle when both firebase/firestore and firebase/auth imported in the main bundle. In fact, it looks like this:

510K is pretty hefty to have to ask the client to download immediately. It's loaded like this (in build/index.html):

To lazy-load the firebase/firestore and firebase/auth you do this instead:

The total sum of all (relevant) .esm.js files is the same (minus a difference of 430 bytes).

But what does it really look like? The app is already based around that

so it knows to wait until db is truthy and it displays a <Loading/> component until it's ready.

To test how it loads I used the Chrome Performance devtools with or without the lazy-loading and it's fairly self-explanatory: 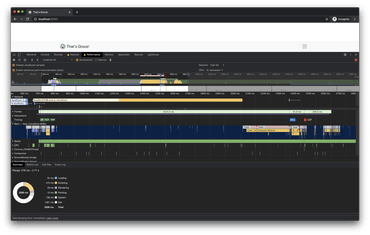 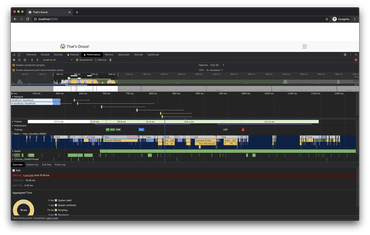 Clearly, the lazy-loaded has a nicer pattern in that it breaks up the work by the main thread.

It's fairly simple to do and it works. The main bundle becomes lighter and allows the browser to start rendering the Preact component sooner. But it's not entirely obvious if it's that much better. The same amount of JavaScript needs to downloaded and parsed no matter what. It's clearly working as a pattern but it's still pretty hard to judge if it's worth it. Now there's more "swapping".

And the whole page is server-side rendered anyway so in terms of immediate first-render it's probably the same. Hopefully, HTTP2 loading does the right thing but it's not yet entirely clear if the complete benefit is there. I certainly hope that this can improve the "Total Blocking Time" and "Time to Interactive".

The other important thing is that not all imports from firebase/* work in Node because they depend on window. It works for firebase/firestore and firestore/auth but not for firestore/analytics and firestore/performance. Now, I can add those lazy-loaded in the client and have the page rendered in Node for that initial build/index.html.