LOTR - Return of the King 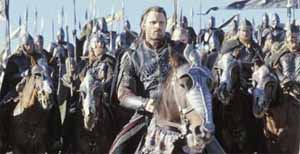 On Thursday morning 11AM, David and I met to go and see Lord of the Rings - Return of the King. Long waited but still feared for it's length: 202 minutes (3 hours and 22 minutes + adverts). The cinema was only half full but we had the luck to go at the same time as some 150 school-kids who did NOT have the patience to sit 4 hours. It was noisy but we learnt to ignore it after a couple of hours.

It was mighty. Magnificent and mighty. Environmental scenes that makes you think it's an IMAX documentary. The acting was better than the two other two films I think, but maybe you simply appreciate them more between all the massive landscape scenes.

I haven't read the book otherwise I would probably also find flaws like this pessimist apparently has.

My biggest concern was that too many things happened too quickly. In the first two films I managed to follow everything but this time it felt like too many things had to be squeezed in to remain under three and a half hours. Maybe they should have done this last film in two parts both 3 hours long. Looking forward to download the Extend DVD version from the net when available.